The end of October we posted a picture of the Sims Garage on West Ames Street in Russell.  The American Flag waving was spectacular, but now we see Ron Bingham has been busy with his creativity and the result is even more heart warming.  You must drive by and take a look to get the full effect.  This picture doesn't produce the same emotions as when you see it up close.  100 W. Ames in Russell is the address in case you have not seen it before.

This tribute is to all of our troops who are still deployed and to those who have returned from fighting to preserve our freedom.  Thank You! 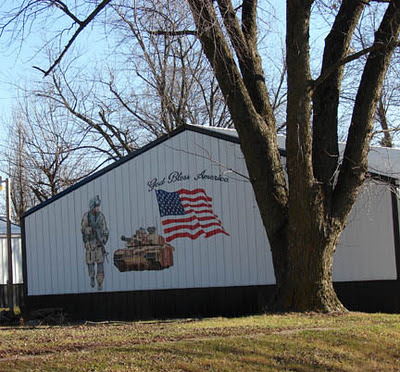 Posted by RIHS at 4:46 PM No comments: Links to this post

Christmas in the Park

Saturday evening, December 10th, Christmas in the Park will be held at the Russell Community Center. A soup supper will start at 5 p.m. with chili and potato soup for a free will offering. There will be sugar cookies the children can decorate and take home and they can enter a coloring contest.
We will offer wagon rides, either pulled by horses or a pick-up depending on the weather. Santa will be there and the children can let him know their want list for Christmas. There will be 3 drawings for adults; a $25.00 gift card, a $15.00 gift card, and a $10.00 gift card. Also, the children may sign up for drawings of some toys that will be displayed under the tree. All are invited so come out and help us start off the Christmas Season in Russell. The event will wind up around 8 p.m.
Posted by RIHS at 2:35 PM No comments: Links to this post

A new three-phase addition is being built on to the Russell Fire Station. The 40'x60' addition will add on two more truck bays and it's funded through grants and the department.
The first phase of the addition, the pouring of the concrete has been completed.  One phase will be done per year, so it's likely to be completed in two years.
The Russell Fire Department has 31 members including 11 EMS personnel.  Nearly all of the members have Fireman 1 status.  Five are EMT first responders and six are EMT-B or highter.  EMT-B stands for Emergency Medical Technician-Basic. 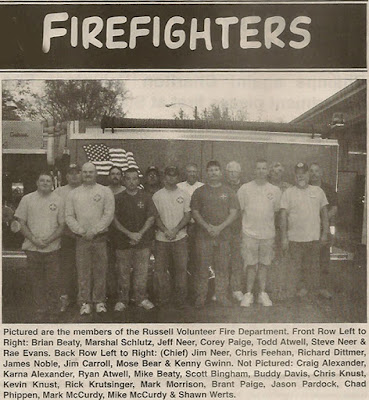 Jim Neer is the chief and Craig Alexander is the assistant chief.  Jeff Neer is the captain and Mark McCurdy is the lieutenant.  The department has added two new members in the past year in Kenny Gwinn and Brant Paige.
The vehicles that the department has include two grass attack trucks, a rescue unit, a pumper, and a tanker.  The department has handled 60 fire and EMS calls so far this year, which is a little below normal.
The Russell Fire Department regularly participates in the annual State Firemen's Convention.  This year the department took third place overall at the convention in Monticello.
The department had its first barbecue cook off this past September and it was a success.  The Russell Fire Department holds an annual Poker Tournament in February and an annual ham supper each April.  The funds raised from the supper go back to the department towards different things that are needed such as supplies.  Part of the proceeds from the Poker Tournament go back to the department as well.


Thank you Russell Firefighters, the residents of Russell are very lucky to have you and we just want you to know how much we appreciate your help.  Your promptness and skilled training has saved us pain and suffering in both illness and a dangerous fire.
Posted by RIHS at 12:20 AM No comments: Links to this post