Posted by RIHS at 4:27 PM No comments: Links to this post 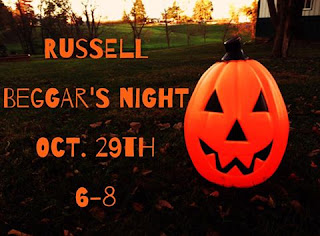 Posted by RIHS at 12:36 PM No comments: Links to this post


City of Russell
Council Meeting
October 3, 2016 7pm
Mayor, Duane Bedford called the meeting to order at 7:00pm. Council members present were Chris Feehan,   Casey DeHoedt, Terry Newcomb, and Jay Pierschbacher.  Also present was Jim Larrington and Mike Graves from Chariton Valley Regional Housing Trust Fund.
The past minutes were read and approved; Chris made motion to approve and seconded by Casey.      Motion carried 5-0.
Income and expense reports were reviewed.   Chris motioned to approve reports and Terry seconded.  Motion passed 5-0.
Mike Graves stated that Chariton Valley Regional Housing Trust Fund has a new director, Rachel Hoffman.  He was asking for support from the City of Russell and stated that they have recently done work in the community and usually works with local contractors.  Chris motioned to donate $1000 and Jay seconded.  Motion passed 5-0.
Chris Feehan reported for the fire department.  He stated that the Fall festival went well, with 9 teams signed up to cook, and 255 meals were served.  Carrie Guthrie won the rifle.
Jim Larrington reported on street work.  He has graded the north side of town and south of the school bldg.  He reported that the City will need a new cutting bar on the grader.  Jim stated that some manhole covers need work.  He also mowed several yards and a notice will be sent out to the owners.
Terry Newcomb stated that a tree branch is hanging at an abandoned house across the street from him.  Jim suggested the City look into buying a truck with a lift to cut dead trees and overhanging branches.
The Community building roof project was completed on September 30.  Harry Reed donated 6 hours of his time to the City.  Scott Bear also donated time on the roof project.
Chris stated that someone is putting personal debris in the limb dump.  The Council discussed putting up a surveillance camera.
Terry stated that last month’s minutes were misleading regarding the completion of the sewer project.  The sewer project is only partially completed.  The portion completed is at the east end of Smith Street.
It was discussed that Dan Reynolds is tearing a house down and would like the meter moved.
Jim Larrington is taking wastewater training in Ankeny this week and next week (Oct. 3,4, and 10,11).
Duane checked on an insurance claim for the siren work, but the contractor could not verify that damage was due to a lightning strike.  The Council decided to keep blowing the noon siren every day.
Duane made up a contract for Scott Bear to sign regarding the land rental agreement.  Scott has already made improvements on the property.  Jay made a motion to give Scott first chance at renewal after the 5 years are up, Terry seconded.  Motion passed 5-0.  Council discussed going to a yearly contract after that time and the Council will negotiate a price at that time.
Progressive Insurance has sent a check for the damage to the flower bed.  The Council will check on prices of new stone caps for the damaged stone wall.
The Council discussed Beggar’s night and Casey motioned to have it on Saturday, October 29 from 6-8 p.m.  Jay seconded; motion passed 5-0.
Chris is still looking into a new snow blade for truck.  He will check with Truck Equipment on used blades.
The Council discussed the donation from Peggy Fulks.  It was decided to buy a couple of benches for the bandstand park and a flower planter; plaques will be made with Peggy’s parents’ names.
There was discussion regarding properties in town that need cleaned up.
Chris stated that a flagpole needs put up at City Hall.
There was a request to close State Street between Smith and Ames for Werts auction on Oct. 22.  Terry motioned to close it and Chris seconded; motion carried 5-0.  Council stated that we should notify homeowners in the area.
The next Council meeting will be held on Monday, November 7, 2016.
Chris made a motion to adjourn the meeting at 8:30pm and Casey seconded.  Motion passed 5-0.