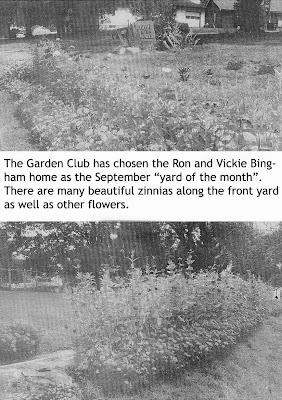 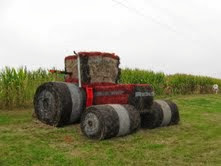 Russell's entry into the Lucas County hay bale contest is the Pfeifer family.  It looks so real from a distance.  It is on the way into Russell from the south, which many won't see.
Posted by RIHS at 12:13 PM No comments:

The Russell Volunteer Fire Department sponsored its 3rd Annual BEST IN SMOKE BBQ competition on Saturday, September 14th and a large crowd gathered in the park to cook, watch and enjoy the days festivities, including a parade, pie contests, BBQ contests, a tractor pull contest and later in the evening a street dance at The Southside Bar.
The Firemen did an excellent job again by bringing the community together. Thanks go to many, including the 26 sponsors; the judges; the Chariton Middle School Band; Mike and Dawn Beaty, who served as Grand Marshals, for both their contributions to the Community; Tony Irving, who sang the National Anthem; Bud Welch with his pedal tractors, which was enjoyed by many children and other parade participants; and to all who came and made it a great day.  The weather was great.
The following are the results of the BBQ competitions:

Aarin and Josh Jensen want to put up a 6' wood lattice fence that will be 10' back from sidewalk, and they will angle the corner so there is clearance for traffic at stop sign.  Council gives OK as long as there is no interference with public access to sidewalk and sight to stop sign and cross traffic is clear.
Signage will be put up that states no parking between signs  at the 100 block of North Prairie.
Delores Carroll was given permission to close the street for dance in front of the Southside Tavern for a street dance from 9 p.m.- 1 a.m. on Saturday September 14th.
Last Chance was given approval for a liquor license.  They also approved a cigarette permit for Harley Haven.
Harley Haven will be having an event on September 21st with a band from 3-7 p.m.  Permission from property owners has been obtained.
The Russell Iowa Historical Society will be bringing in some dirt to fill in the area in front of their new building.
Congratulations to our Russell Volunteer Fire Department on their 3rd place finish at the State Fire Convention.
Council approved to accept Agriland FS propane quote at $1.25 per gallon for the 2013-2014 heating season.  The fire Department will take care of hanging the AED at the Community Building.
Funding is in process to replace the current fire rescue truck.  Work continues on the new addition to the fire station.
Lagoon Design engineer recommended removal of all the trees from the south side of the lagoon.
The issue with junk cars was discussed.  Every car has to have a junk permit from the DNR.
There was discussion as to the best site for a dump station at the campground.

The Russell Volunteer Firemen placed third at the State Volunteer Firemen Convention the weekend of September 7-8.  Congratulations and again we thank you for your excellent, untiring dedication to helping our community feel secure if its fire, rescue, or life saving emergencies.
Posted by RIHS at 3:36 PM No comments:

We send our farewell wishes to Buddy and June Davis, long time Russell residents (teacher and bus driver/fireman) as they have officially moved to the Humeston area.  Daughter Annie and husband Tyler; Chloe and CJ are there also.  June said it is great to be able to walk to work every morning!  Even if it is right on Highway 651.  Buddy is still working toward getting on the kidney transplant list.  We wish them well and thank them for their services to the community.
Posted by RIHS at 3:39 PM No comments: