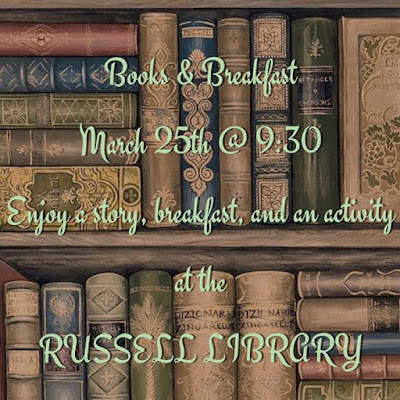 Posted by RIHS at 2:57 PM No comments: Links to this post

Duane Bedford called the meeting to order at 7:00 p.m.

Duane stated that the Council should do a roll call vote to approve and close the budget hearing and budget resolution as published for the City of Russell FY2018 budget.  Casey, Chris, Corey, and Jay when called by name each voted to approve.

Regarding last month’s Council minutes, Chris stated that the motion to approve a bid of $7000 to remove trees pending notification of the residents was not carried unanimously; Chris stated that he voted Nay on this motion, which would make the vote 3-1; Corey abstained.  The minutes from February were approved, with the above amendment.  Chris made the motion to approve with the correction, Corey seconded.  Motion carried 4-0.

Austin Smith, from Garden & Associates, talked about the City of Russell’s disadvantaged community status in regards to our compliance schedule for completion of repairs and improvements to our wastewater system.  Some elements in the effluent from the system exceed current and pending limits by EPA and DNR standards.  The disadvantaged community status gives the City a two-year extension on deadlines.  Chris stated that he would like to see the City get some repairs done on our own and monitor the effects the repairs could make.  Then the City could reevaluate what is needed and resubmit in two years a request for needed projects.

Austin stated that many techniques are available for testing sewer lines.  The Council discussed current sewer problems such as storm drain run-off and water leaks.  Chris also stated that the City has plans to update streets and does not want to dig up streets to work on sewer lines after streets have been newly repaired.

Austin discussed putting flow meters in man holes.  Austin will look into some options for us to begin locating problems.

Dan Sinclair, from Metering and Technology Solutions, spoke about their bid for the City to replace meters and put in a remote reading system which is Cloud based.  The base charge for the computer set-up is $6500 and a $.89 per month fee per meter.  New meters with radio reader would cost approx. $226 each.  Dan recommended a leak detection test before changing out our meters.  Chris stated that Jim get estimates on leak detection services and let Council members know by phone or email before next Council meeting.

Brian reported on the Fire Dept.  He stated the Fire Dept. had been doing CRP burns.  Also, the dept. has been given a grain rescue tube and will be training on its use.  Chris asked about future policy of pool fills for residents.  Brian stated that he thought the Fire Dept. should do them for a donation and cost of the water at the time of the fill.  It was also discussed keeping record of the pool fills at City Hall.

Jim reported on water/wastewater – he stated that he pumped the well down again, which is required.  Jim found new holes in the sewer lines out in the field.

Jim reported that he put new blades on the road grader.  He has been cleaning out ditches that have filled in.  Rock has been put down on Smith and Stanton streets.  Jim reported that he only got one bid for the Prairie Street project.  Chris motioned that we go ahead and hire Mathes Construction and Jay seconded it.  Motion carried 4-0.  We will contact Mathes as soon as possible in keeping with completion date of May 1.

Jim received on loan a metal locator from HD Supply.  It is a demo model and is priced as is for $550.  A new one costs approximately $700.  Corey motioned to purchase the metal locator and Chris seconded.  Motion carried 4-0.

Scott Bear brought up some items on the contract signed between him and the City of Russell regarding hay ground.  Some items were added and amended on the contract with both parties agreeing and signed by Council.  It was agreed that Scott could put up a gate and he will provide hedge post; the City will do locates.  It was agreed that the City would provide seed in case of damage caused by City officials.  It was agreed that a padlock could be put on gate with the City and Scott having a key. In New Business, Mike Beaty provided information on Employment Practices Liability Insurance.   One million dollars in coverage costs $1875 per year with a $1500 deductible.  Chris motioned to approve purchasing this insurance and Casey seconded it.  Motion carried 4-0.

Casey made a motion for Council meeting to go past 9 p.m.; Chris seconded it.  Motion carried 4-0.

Letters have been mailed to homeowners regarding the ash borer problem and explaining that trees on the adjacent right-of-way may be affected and will be cut down by the City.  Duane proposed a tree ordinance for the Council to approve regarding a no-planting policy in right-of-ways (60 ft.)  Chris stated he agreed with the first two portions of the ordinance, but not the third one.  Jay made a motion to approve the tree ordinance using only the first two portions as Chris stated; Casey seconded that motion.  The Council was called for a roll call vote by name and Casey, Chris, Corey, and Jay, when called by name, each voted to adopt the ordinance.  The second reading of the ordinance will be given at the April Council meeting.

Posted by RIHS at 10:47 PM No comments: Links to this post

Around Town
Southside is celebrating St. Patrick's Day on March 11 with an Irish breakfast at 8, parade at noon and dinner starting at 4.  Everyone welcome.
Everyone is welcome to the Russell Museum/Library on Monday, March 13 at 2 p.m. for
coffee, fellowship and to hear Russell's fabric picture artist Meg Prange. She will show samples of her artistry and talk about the process in making them. Meg's work is seen in many places in Chariton. Bring your friends.

Calendar
Lent is a season of preparation for the great celebration on Easter morning.  Faith United Methodist Church's
Ash Wednesday Lenten service will be held Wednesday, March 1 at 6 p.m.  All are welcome.
Wednesday, March 1, 6:30 p.m. Faith United Methodist Night Owls, Betty Mason is the hostess and Grace Peterson will have the lesson.
Monday, March 6, 7 p.m. Russell City Council
Tuesday, March 7,  6 p.m. American Legion/Auxiliary  at the Community Center
Saturday, March 11, Southsides St. Patrick's Day, celebration, see above for details
Sunday, March 12, Daylight savings time change
Monday-Friday, March 13-17 , no school Chariton Spring Break
Monday, March 13, 2 p.m. Meg Prange will do her presentation/her fabric picture creations, see above
Thursday, March 16, 5:15 p.m. Museum/Library Board meeting
Sunday, March 19 , 2 p.m. Russell Sportsmens Club,  First shoot of the season:  Handgun, any caliber:
Tuesday, March 21, 10:15  a.m. Russell News meeting at the Museum, everyone welcome
Saturday, March 25, 9:30 a.m. last of the Saturday Kids Breakfast and Books at the Museum/Library
Saturday, April 1, 5-7 p.m.  Faith United Methodist Church will have their spring soup supper, Wonderful  variety of soups, salads and pie.  Free will donation.  All are welcome.
Saturday, April 8, Russell Volunteer Fire Department annual supper, more information later
Russell City Council Mini-minutes
February 6, 2017
Council members present were  Chris Feehan, Terry Newcomb,, Corey Paige, Casey DeHoedt(acting as secretary), Jay Pierschbacher and Mayor Duane Bedford.  Also Jim Larrington and visitors Dolores Carroll, Sean Davidson, and Debbie Davidson. Kris Wilkins was unable to attend due to illness.
It was approved to close a portion of Shaw Street on March 11th at 12:00 noon for a St. Patrick’s Day Parade (organized by the Southside Bar & Grill).
Brian Beaty reported the department was applying for many grants to update the gear for our fire department
volunteers and the department was preparing for a supper at the Russell Community Center on April 8th .
Jim Larrington reported there was a main break on the 3rd block of Ames Street.
The council agreed to take over  the former Great Western Bank building. Jay motioned to purchase the building; Chris seconded the motion. Motion carried 4-1.
18 Ash trees with Emerald Ash Borer were marked for removal around town. It was approved a bid of $7000 pending notification of the residents before any action be taken.
It was approved to purchase  a 2010 Ford Explorer to serve as a police vehicle for the city.
++++++++++++++

For Russell news updates try the Russell Historical Society Blog http://Russelliowahistoricalsociety.blogspot.com. If you have comments, suggestions or you want to volunteer for this column, please e-mail myoak10@gmail.com or call 641-535- 2402, or contact Casey at  www.facebook.com/russell.iowa or 641-931-6008, or dehoedtc@ega.edu

Posted by RIHS at 10:08 PM No comments: Links to this post