Congratulations to the Russell Reivers 4 H Club and their leaders who did very well with all their awards at the Lucas  County Fair.

For Russell news updates try the Russell Historical Society Blog http://Russelliowahistoricalsociety.blogspot.com. If you have comments, suggestions or you want to volunteer for this column, please e-mail myoak10@gmail.com,  call 641-344-6609, or contact Casey at www.facebook.com/russell.iowa

Posted by RIHS at 5:24 PM No comments: Links to this post

City of Russell
Council Meeting
July 8, 2019
Present:  Duane Bedford (Mayor), Council members:  Chris Feehan, Terry Newcomb and Casey DeHoedt, City Maintenance Jim Larrington, and City Clerk Cindy Smith.
Mayor Bedford called the meeting to order at 6:05 pm.
This meeting was for scheduling and discussing street maintenance planning.
Mayor Bedford had a map of street that he feels needs to have spot repairs with grading/crowning/rocking.   The City is also wanting to keep as much as possible from doing major repairs on roads until the sewer project is completed as some roads will be torn up at that time.
The listing of roads that will be repaired this fiscal year are as follows:
1.         Highland street to fix a frost boil area from Smith to the first alley going north with seal coat.
2.         Ames – At Ames and West Street repair where culvert was replaced with seal coat.
3.         Shaw – Main Street to West Street L&L Pelling with seal coat and do all work related to this.
4.         Corse Street – will have L&L Pelling look at this and repair as needed work that was completed last year that is cracking.
5.         The bridge on West street will be checked for possible repair or replacement.  The City will also discuss this location with the county as we may need extra equipment to repair this crossing with a large culvert.
7.         Crocker Street, Chris Feehan will discuss splitting cost with land owner to clean out the ditch and fencing.
It was also discussed to rent a skid loader with a brush cutter to use along with the road grade
and backhoe with these road/ditch repairs.  We will also be renting a street roller to compact
the roads with the new gravel.
Ordinance 151 for the increase in solid waste  by $2.00 per canister was read and motioned for approval by Casey DeHoedt and this motion was seconded by Chris Feehan.  Voting was as follows:
Casey DeHoedt – Aye
Chris Feehan – Aye
Terry Newcomb – Aye
There were no nay’s.
Second reading of Ordinance 151 will be at the August 5, 2019 Council Meeting.
24 hour street parking on Shaw Street were discussed with City wide 72 hour parking.  Mayor Bedford will be working with Officer Jefferies on the legalities and ordinances that will need to be made to get these parking issues put into effect.  They will also work on snow parking ordinances as we had several problem area’s last year.
It was also suggested that City Clerk, Cindy Smith become a notary but it was determined that we have two (2) notaries in town and that should suffice for now.
We will also be getting pricing on a second computer for the office as both Jim Larrington and Officer Jefferies will now also be needing.
Casey Dehoedt motioned for meeting adjournment at 7:15 and this was seconded by Terry Newcomb.

Posted by RIHS at 2:51 PM No comments: Links to this post 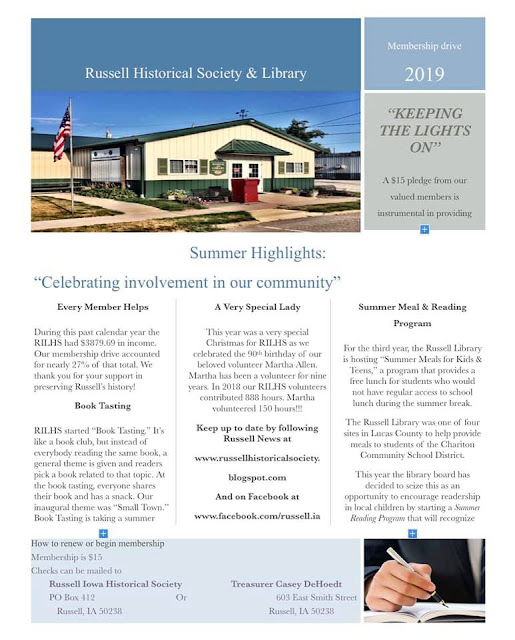 Russell Library & Historical Society is having its annual membership drive. 📚
If you like to be a member you can stop in or mail your contact info and dues. Or you can PM this page for further information.
If you’ve been a member in the past but have not received this year’s newsletter, I will need to update your contact information.
(Membership is more of a pledge drive and it doesn’t entail anything other than your support and our sincerest appreciation).

Posted by RIHS at 9:08 PM No comments: Links to this post