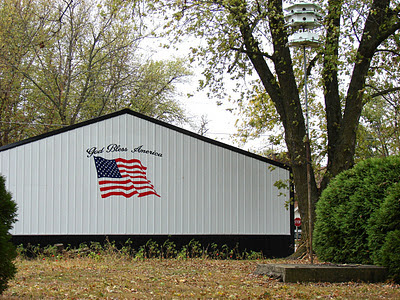 The next time you are in the 100 block of West Ames Street in Russell, you might notice on the Lowell Sims Property the beautiful American flag flying on the north end of their metal building.  When Lowell put up this building a couple of years ago, he wanted something painted on the building, so he hired Ron Bingham to go to work.  This project isn't complete yet.  Next summer Lowell would like to have something painted on the building about firemen, police, or different branches of the Military.  A farm scene would be another possibility.
This is something we can keep watching for when the snow is melting and summer is approaching.  Lowell and Ron's minds will be working on this project this winter, trying to come up with the right pictures.

(See if you can spot the bird-house).
Posted by RIHS at 2:32 PM No comments: Links to this post 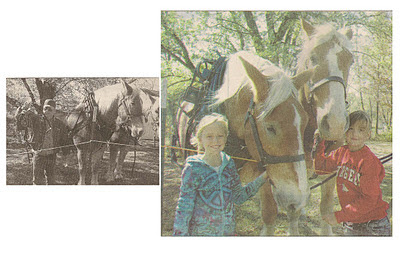 Mike Beaty of Russell (left) holds up a horse draft bridle while standing next to his two Belgian horses, Bert and Ernie.  Bert and Ernie are named after the famous Sesame Street duo and were award-winning horses at the Iowa State Fair in 2008, 2009 an 2011.
In the picture to the right, cousins Elizabeth Wright (left) of Indianola and Amelia Phillips of Williamson stand with Bert and Ernie that were at the Lucas County Historical Society Museum's open house on October 15th.  Beaty gave people demonstrations on the horses and told about harnesses and bridles used on them as well.
Posted by RIHS at 5:10 PM No comments: Links to this post

CRUCIAL REMINDER !!!!
We are in danger of losing the recyle bin in Russell.  It's a shame that some abusers are going to take the bin away from the Russell residents who care enough to recycle.  The rules for this bin are posted on a large sign situated behind the bin.  It is very clear what articles can be placed in the bin.  Sadly, Russell has the reputation as being the worst offender for placing unacceptable items into it.  The hauler of the bin must dispose of all items that are not acceptable and at times has come back with a pick-up full of items (our garbage) that were not accepted, including all of the plastic grocery bags (Hy-Vee, Walmart, or black garbage bags) that were not supposed to be put in the bin.  Let's do our job and make it easier for him.  The trailer is unloaded from the bottom and then sorted by hand.

The purpose of recycling is to lessen the load on landfills. Why place it in your garbage can when with a little effort on our part, we can see that some items can be separated to be recycled.  If the abuse continues, he will either remove the bin or start charging to have it in Russell.  ABUSERS, Please stop your uncaring actions.  Thank you to the users who are so considerate.

The red sign behind the recycle bin states the following:


1.  Place items in the proper bin, nothing on the ground.  If it doesn't fit, it doesn't get recycled.
2.  Use both sides of the trailer for space.
3.  Rinse and empty containers - clean items only.
4.  Take all items out of the plastic grocery bags, note the message about plastic bags.
5.  Acceptable plastic is - Plastic food, beverage and detergent containers ONLY!  Flatten the containers so there is room for more.  No Plastic toys, or pesticide, herbicide or chemical containers.
6.  Glass -  Nothing but container glass, glass bottles and jars only, no light bulbs or window glass.
7.  Tin and Aluminum - All tin and aluminum cans (crush if possible), foil and tin pie plates, lids from glass jars are acceptable.
8.  Paper Products - Newspapers, magazines, and phone books, cardboard boxes (flattened), Clean paper only.  No waxed or coated paper.

Posted by RIHS at 5:05 PM No comments: Links to this post

This article appeared in the October 4, 2011 Chariton Leader, written by Bill Howes.
Judi Wright has been a positive constant with the Lucas County Farm Bureau while other people change professions more often than farmers rotate their crops. 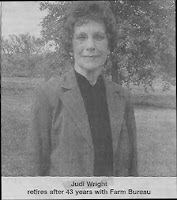 An Open House was held for Judy on Monday, October 10, from 4-6 at the Lucas County Farm Bureau office.
Judy began working for both the Lucas County Farm Bureau and the Farm Bureau Insurance in August 1971.  Four years ago she began working for Lucas County Farm Bureau only.
Judi and her husband, Jim, live on a farm northeast of Russell.  It's a century farm that's existed well over 100 years and it's where Jim was born and raised.  They had purchased the farm from Jim's folks and they live in the house that Jim's grandfather built.  They have lived there for 44 years.
Jim was a farmer and is mostly retired now.  He still does farming chores and helps out his son, Gene, as needed.  Gene has hay and cattle and also runs his own carpet cleaning business called "On the Spot Floor Care".  Gene and his wife, Paula (she is the superintendent of Chariton Schools), live just a mile and a half down the road from Jim and Judi.  They have three children,  Alison, Ashley and Alex.
Jim currently mows lawns for the Chariton school district.  He was a county supervisor for Lucas County for 18 years and after retiring from that he has worked for the school district.  When Jim farmed he farmed cattle, corn, beans and hay.  He and Judi rent all their farmland out now, which consists of 200 acres.  They both have a "green thumb" and love to garden.
Judi says she has seen many changes since she started in 1971.  She says she has had the opportunity to work with the greatest people in Lucas County.  She thanks the Farm Bureau for keeping her around so long.  She says it's been a pleasure to work for such an outstanding farm organization these past 40-plus years.
Posted by RIHS at 12:23 AM No comments: Links to this post