The 2013 Russell Alumni Reunion planning is well under way. The reunion date will be May 25, 2013 in Russell. Although we don't have access to the school anymore we have lots of ideas in the making to have an amazing celebration involving the Fire Station, the Historical Museum and the stage up town for the festivities that evening. We will be mailing out the invitations by March 15th. If you have moved within the past five years we would love to have the updated list as soon as possible. As we are on a very tight budget we are trying to do as many things through phone, email and Facebook contacts. Please contact one of the Alumni Committee, which consists of myself Donise Atwell Altenhofen, Committee Chairman at email - altenhofen@sirisonline.com, phone - 641-203-0993; and facebook.com "You Grew Up in Russell" or Kelli Miller Spencer, Vice Chairman at 641-203-2095 or Felicia Brown Beaty, Treasurer at 641-203-2894 and Nicki Slack Hermann, Secretary at 641-203-2063. We are looking forward to a fun celebration in Russell. Let's keep the Trojan Spirit alive.
Posted by RIHS at 8:34 PM No comments:

Desperate for a Christmas Gift 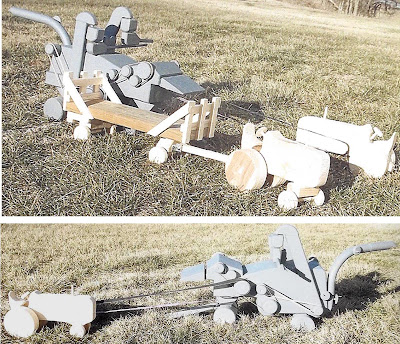 The above is a picture of Ed Sellers' "desperate for a Christmas gift" project for his two year-old great-great nephew.

He designed and built a threshing machine along with a tractor and hay rack.

It is made mostly out of laminated wood.  The main drive belt is an emery cloth.  Other items used  were  tooth picks and rubber bands.

It appears to be much larger than it actually is, the threshing machine stands about 10 inches tall, is 6 inches wide and 18-24 inches long and weighs about 10 1/2 pounds.

He got a little carried away after he finished the tractor and hay rack which resulted in the threshing machine.

The threshing machine will stay in Russell at the Museum,  the tractor and hay rack are at home in Texas.

He has plans to make a steam tractor, which was inspired after the first project got out of control.
Posted by RIHS at 3:20 PM No comments:

Ron Hoover's elaborately decorated yard full of all kinds of Christmas decorations, won this year's Wayside Garden Club Outside Decoration Award.  You may have seen this yard as you drove into Russell on the main street into town.  The picture did not make the newspaper so we are mentioning it now to give recognition to Ron for his efforts in lighting up that corner of Russell with his special Christmas projects.

A motion to approve Resolution 13-1 was made by Jay and a second was received from Duane.  This Resolution is to list the paid 2013 holidays for full time city employee, Larry Mitchell.  The motion was approved 3-0.


An update on junk vehicles was given by Police Chief Jeff Johnson.

Wendy, the City Clerk asked for a budget hearing at the next meeting.

The Community Club will be contacted by Craig Gooder about setting up a town meeting with Greg Heartsill.

Wayne made the motion to adjourn at 7:52 p.m. with second by Jay.