History of the Curious Goods Building

The historical information in the following article appeared in the Chariton Leader on October 23, 2012 in the Russell News Section.

On September 25, 2012, residents watched as a large wrecking machine with its gigantic scoop pulled up to the old white building at the corner of Prairie and Shaw Streets (across from the Russell Museum and Library) and began knocking it down.  In less than an hour a pile of old lumber was all that remained of this old historical building in Russell.

In order for a town to grow and improve its appearance, this sort of thing must happen, but in Russell it happened twice in less than a month.  On October 15, 2012, residents waited with awe as another wrecking machine approached on the west side of the same block (east of the bank and the postoffice).  Spectators watched as the large machine touched the southwest corner of the building and it came down with a loud boom.  The entire building crumbled to the ground in a cloud of dust, throwing bricks in all directions almost hitting the by-standers and their vehicles.  (See the photos below).

The first building to fall was the old Chester Feed and Produce Store (owned and operated by Merle and Oneita for more than 30 years).  It was originally the two story Hasselquist Building which partially burned during the 1929 fire that wiped out most of the buildings on the south side of Shaw Street.  The building was rebuilt (without the second floor) and later was owned by the Hiles and the Behnkes, Sonnie's Beauty Shop and then by Hundley's Tire Shop.

H.W. Elliott originally built the building in 1875.  One well known owner was E. Dewey Hess where he had a soda fountain and a drug store from 1940 - 1961.   He purchased the store from A. J. Mettlin who had been at this location from 1901.  In 1962 Bob Long (Long's Sundries) purchased it.  In between these years, Bob and Vera Edwards (Bob and Vera's Varieties) operated their store for 13 years.  Then Bev and Jim Werts purchased it and opened an antique store, but kept the soda fountain (Bev's Corner Store).  They operated it from 1981 - 1994.  A toy train shop and the telephone office were once located on the second floor.  In October of 1998, Julie and Carl Moore owned and operated an art/craft store, but stopped using the store a few years ago.  As the bricks began bulging out and slowly falling to the ground, Carl tried patching the walls to no avail.  He then began knocking bricks out to remove the second floor.  This proved to be an immense and dangerous project, so the work stopped.  It was interesting to see the remains of an elevator at the rear of the building, which many people had forgotten was there.  No plans have been mentioned for this location.

The sadness at seeing these buildings disappear will dim as time goes by and we look forward to whatever the future might bring to the town of Russell.
Posted by RIHS at 11:39 AM No comments:

Another Historical Building Comes Down in Russell 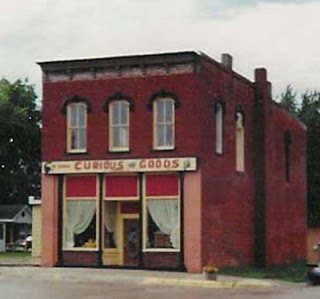 Residents watched as the Curious Goods Building in Russell came down with very little effort.  One push on the corner of the building and it completely fell to the ground in a cloud of red dust.  This building has slowly been falling during the past year and now it is completely down.  The pictures can't describe the feeling everyone was experiencing.  There were lots of memories associated with this building through the years.  At one time the telephone office in town was located on the second floor.  A pharmacy was located here over a hundred years ago, Bev and Jim Werts had a store here and most recently, Curious Goods displayed and sold there interesting wares.  There was even an elevator at the back of the store. 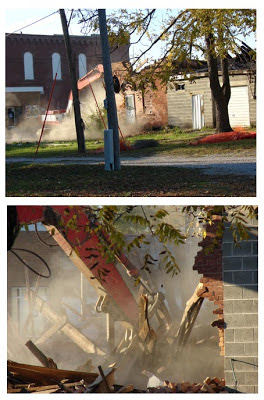 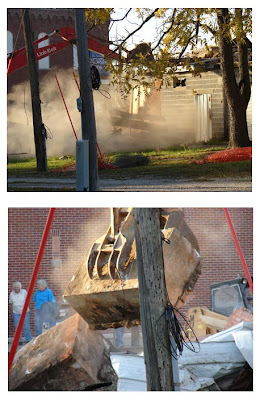 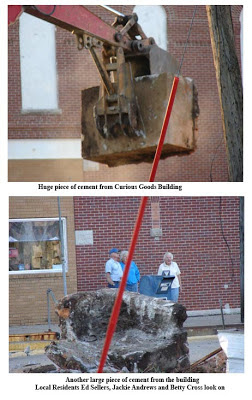 Check out this site for more:
http://www.facebook.com/groups/271290096218537/
(you'll need to have a login name and password to get on Facebook)
Pictures on Facebook by Carol Swigart
Comments by Charles Wright and Wanda Horn are very interesting and informative
Posted by RIHS at 9:04 PM No comments: