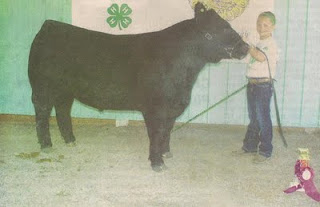 The Lucas County Fair Grand Champion Market Steer division was won this year by ten-year-old Mikenzy Beaty, daughter of Brian and Dawn Beaty of Russell, on August 3rd.  The steer was also named the heavyweight division champion as well. 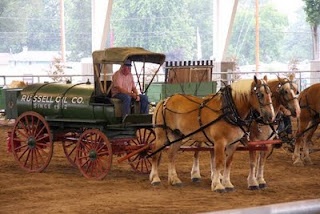 Mike Beaty, Mikenzy's grandfather, with Bert and Ernie pulling the Russell Oil tank wagon owned by the Phippen family of Russell, competed in the draft horse farm division at the Iowa State Fair on August 16th and won 1st place in the antique machinery class, the obstacle course class and the barn yard pull class.  He also won 2nd place in the log pull, 3rd in the cultivating class, and 5th place in the feed team race class.
Mike's team was named 1st in the best matched team class and was named the high point performer for the days activities.
Posted by RIHS at 4:39 PM No comments: Links to this post

Kelly Gookin of Russell is the third Chariton School Board candidate.  Kelly feels education is important to her because she has two sons in the Chariton school system.  Tyler is in fifth grade and Joe is a freshman. 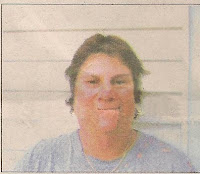 "The most important thing you can do for a kid is to give them a a good education, and I care about kids," said Gookin.  Kelly used to work as a teachers associate in the Russell School and wanted students from Russell to have Russell representation.  She wants kids to be able to come to her with their problems and she will listen to them.  "If I can do something to make things better for kids, then I will feel like I accomplished what I am setting out to do," Kelly said.  The election is on Tuesday, September 13.  Voting in Russell is done at the Russell Community Building from 12-8pm.
Posted by RIHS at 10:52 AM No comments: Links to this post

Russell's Yard of the Month for August

Nestled under a beautiful evergreen tree, the Joe Moore house and yard, with very unique decorations displayed in the yard, won the August Yard of the Month in Russell.  A miniature windmill, a miniature rooster and red, white and blue flags are just some of the ornaments that are standing around the place.  Potted flowers on the porch and blooming ones in a pot under the tree catch your eye.  A smiling face greets you from the trunk of the evergreen as you drive by.
Posted by RIHS at 9:10 PM No comments: Links to this post

Museum Will be Open on Two Sundays in August

The Russell Museum will be open for two special Sundays, August 7 & 14,  from 3-5 p.m.  for usual business. Joan Gooder will offer to teach anyone during those hours how to crochet or knit small prayer squares for the troops. Contact Joan  at 702-806-7682 if you need more information.  Also bring any neutral-colored yarn if you have it.
Posted by RIHS at 3:43 PM No comments: Links to this post

The Russell Sportsmen's Club will hold a charity trap shoot on Thursday, August 4 at 7:00pm to benefit Lucas County Relay for Life.  Shooters may register as individuals or as teams of five.  There will be a novice division for those with little or no experience, as well as a veteran division.  Certified coaches and other mentors will be on site.  Entry fees cover everything; shells, clay targets, eye and ear protection, instruction, and mentoring.  Firearms will be available to lend.  Participants must be 12 years or older.  Russell Sportsmen's Club is located at 41570 280th Avenue, southwest of Russell.  Entry forms are available at the Chariton Chamber Office, Chariton True Value, Beaty Insurance in Russell, and the Albia Newspaper Office.  For more information, call Dan Morrett at 641-203-5296.
---------------------------------------------
Saturday, August 6 from 8-5, the Sportsmen's Club will host an Iowa DNR Hunter Safety Course.  If you have kids or grandkids who need it, sign them up.  Participants must be 12 years or older or turn 12 during the season they plan to hunt.  The course is provided by the DNR.  Register online by clicking the following link: Iowa DNR Training .  Lunches and drinks will be available for a nominal fee or students may bring sack lunches.

Following the course, participants will have the opportunity to stay to shoot clay targets, with everything provided by the Sportsmen's Club.